Ruby Raccoon and her son, Ricky. 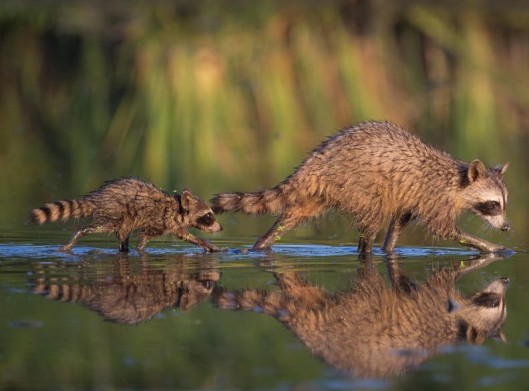 Ruby was a gray raccoon with a black mask across her eyes. There was some red hair in her dense fur. She was going to give birth to her kit in the spring. Ruby was looking forward to talking with her relatives when they met in the forest clearing for their monthly meetings. She couldn’t wait to tell them about the four little raccoons moving inside her body. Ruby wanted to find out who else would be giving birth in the spring, and ask others where the best places were for catching fish after the ice broke. This would be her first litter. Her front paws loving touched the bulge in front of her body.

Ruby lived in a tall oak tree in the forest. The tree had a large hollowed out space, carved by Mother Nature. It was so deep that it stayed warm and dry when it rained. It was just the right place for her to wait until Spring. She closed her eyes and slept deeply and dreamed of the wee ones growing inside her. She knew they would be welcomed with joy and excitement by the other raccoons in the community.

Spring came early and the snows had receded. The hollow was warm from the heat given off from Ruby’s body. It was telling her the baby raccoons were about to come. She looked up as her sister entered the den. “It’s time,” she said. The long, hard labor was getting to Ruby. She was tired and counted three babies. She nuzzled two of them and got no response. She kept on licking them. They were girls but they were still. She moved to the third raccoon in the litter and licked it. Over and over she licked the lifeless raccoon until her sister stopped her. Her heart was breaking with grief. She would never get to watch them grow. Her sister said, “Ruby, you must rest,” and she carried the baby raccoons out to a special place in the forest while Ruby slept.

When her sister returned, she found Ruby in labor again. Out came the baby raccoon. She looked down at him and heard soft, bird like twittering sounds. Her heart grew large with joy. She licked him until he was clean. She moved close to him and he started to nurse. Ruby looked at him with tenderness and said, ” Your name shall be Ricky, Ricky Raccoon.” She smiled with pride at her new-born son. ( Continued in Part Two ).